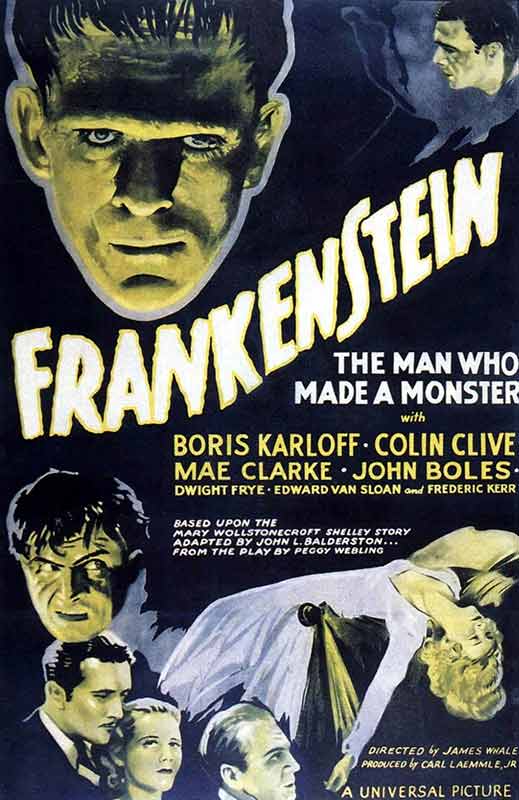 Listen to this segment from The Mike Malloy Show here Permalink: http://www.voicesinourheads.com/2016/01/29/following-footst…r-frankenstein-2/

This year marks the 20th anniversary of Fox News. Twenty years of feeding and nurturing its audience with lies and distortions has created a monster that has slipped its leash, overthrown its creators, and freely roams the countryside. It’s blind, it can talk, and it loves death. What could possibly go wrong?

And now a little backstory …

After the success of Dracula, Bela Lugosi was offered the role of The Monster in Frankenstein. Lugosi considered the part to be beneath his talents, said he was a star in his own country, and did not come to America “to be a scarecrow.” William Henry Pratt, a struggling British actor, took the part, changed his name to Boris Karloff, and became a movie star.

At the end of The Ghost of Frankenstein, the laboratory is in flames, Lon Chaney Jr. is stumbling around as the blind Monster speaking in Ygor’s (Bela Lugosi’s) voice, and finally the roof caves in, trapping The Monster in a white-hot inferno.

The Monster Movie was the cash cow that kept money rolling in to Universal Studios throughout the Great Depression and beyond. But by 1942 Frankenstein’s Monster wasn’t the impressive draw it once was. It was time to rejuvenate the franchise by adding another monster into the mix. It was time for Frankenstein Meets the Wolf Man. But there was a problem.

The Monster had been burned alive in The Ghost of Frankenstein and Lawrence Talbot, The Wolf Man, was beaten to death by a silver walking cane. That wasn’t the issue. Scriptwriters had no problem resuscitating monsters for sequels. All they had to do was slip a little cinematic sleight of hand into the beginning of the film and here are the monsters ready for mayhem once again.

No … the problem was that Lon Chaney Jr. was the The Wolf Man. He had to reprise the role. He could not play The Wolf Man and Frankenstein’s Monster. Who would play The Monster?

Bela Lugosi. He needed the money.

The Monster makeup was slapped on Lugosi but resulted in a Monster that still looked like Bela Lugosi. The Lugosi-Monster blindly lurched around the sets, spoke in a thick Hungarian accent … and test audiences laughed.

The film had to be drastically re-edited. Every scene where The Monster spoke was left on the cutting room floor (except for two brief scenes that show Lugosi’s mouth moving without sound). The Wolf Man became the focus of the film, which was only 73 minutes long. The box-office returns were enough for Universal to produce two more sequels, House of Frankenstein and House of Dracula.

Three years after House of Dracula Universal teamed The Monster, The Wolf Man and Dracula (this time with Bela Lugosi as the real Dracula) with Abbott and Costello in Abbott and Costello Meet Frankenstein. This was the end of the era of Universal’s Monsters. The monsters who petrified audiences in the 1930s were played for laughs at the dawn of The Atomic Age.

Now the reason I told you all that was because I’ve been stuck in a sick room for the last couple of weeks with a great big TV. I had some sort of King-Hell virus that made me cough constantly all day and night. When I wasn’t coughing, I was trying to breathe … while binge-watching everything. I was so sick I remembered when I had pneumonia … with nostalgia. Gosh, I thought … if only I could have pneumonia again instead of this stinking virus. At least then I’d feel better.

I was watching The Bride of Frankenstein just before I drifted off into delirium. Karloff as The Monster had learned how to speak. “I love dead…” I didn’t agree with him on that point but as the kids used to say … I could dig where he was coming from. And I could only muster the same sophisticated sentence structure used by The Monster. To hell with verbs. They’re too hard. As I sank into the void I remembered a McClatchy news article I could barely get through. Too many big words. But I got the gist of it: Trump … bad.

There it is Ladies and gentlemen … all my political acumen honed to laser-like precision. Trump … bad.

Looking at the surviving field of Republican wanna-be nominees, I don’t see anyone who actually wants to BE president. I just see a bunch of grifters who are making as much money as they possibly can RUNNING for the nomination.

Sometime in the next couple of months Trump’s accountant is going to call Trump up and tell him that they’ve reached their goal of One Billion Dollars. Trump will then bag up the money, hold a press conference, and tell the reporters he must suspend his campaign for some reason or another. Then he’ll go home, fill up a silo with his “campaign” winnings, and backstroke through the billions like Scrooge McDuck. I don’t know what dollar amounts the other candidates have set before they bail out to count their cash and spend more time with their families. Eventually the Republican game of Musical Money Chairs will end and the poor sap left standing after the convention will have to actually be the nominee and go out and get clobbered by Hillary or Bernie.

Then the Real Horror-Show will begin.

The people who fanatically followed Trump, Cruz, Carson, Huckabee, and Santorum will explode if for some bizarre reason Jeb or Kasich ends up carrying the Republican banner into battle. These minions are not mentally capable of accepting anything less than the pure crazy they’ve been feeding on for a generation.

This year marks the 20th anniversary of Fox News. Twenty years of feeding and nurturing its audience with lies and distortions have created a monster that has slipped its leash, overthrown its creators, and freely roams the countryside.

It’s blind, it can talk, and it loves death. What could possibly go wrong?

Reflecting upon The Walking Dead