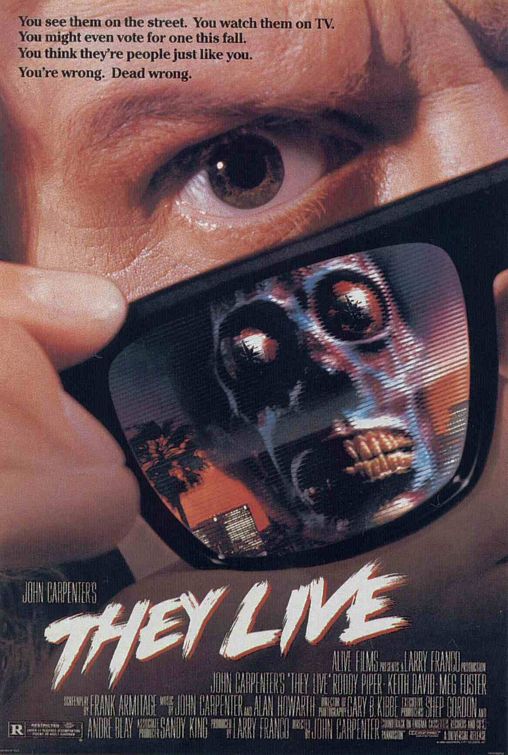 One of my favorite films about aliens invading the earth is John Carpenter’s They Live. The aliens strip the earth of its resources and accelerate global climate change to change earth’s environment to that of their home planet. Some humans collaborate with the aliens and are rewarded for their betrayal with money and positions of power.

The film is about what happens to the people, communities, and the environment, when natural gas is obtained by a stimulation method known as hydraulic fracturing.

Hydraulic fracturing or “fracking” is a means of natural gas extraction employed in deep natural gas well drilling. Once a well is drilled, millions of gallons of water, sand, and a mixture of 596 chemicals, many of them toxic, are injected under high pressure, into the well. The pressure fractures the shale and props open fissures that enable natural gas to flow more freely out of the well.

Generally 1-8 million gallons of water may be used to frack a well. A well may be fracked up to 18 times.

For each frack, 80-300 tons of chemicals may be used. Presently, the natural gas industry does not have to disclose the chemicals used, but scientists have identified volatile organic compounds such as benzene, toluene, ethylbenzene and xylene. Many of the chemicals in the proprietary fracking fluids are carcinogens, and once they are forced into the shale, not all come back home.

By 2007, there were 449,000 natural gas wells in 32 US states, an increase of more than 30 percent since 2000, with serious episodes of groundwater contamination near drilling sites.

The average well is up to 8,000 feet deep. The depth of drinking water aquifers is about 1,000 feet. The well casings leak natural gas as well as fracking fluid into water wells.

In 1974, the Safe Drinking Water Act was passed by Congress to ensure clean drinking water free from both natural and man-made contaminates.

In 2005, the Bush/Cheney Energy Bill exempted natural gas drilling from the Safe Drinking Water Act. It exempts companies from disclosing the chemicals used during hydraulic fracturing. Essentially, the provision took the Environmental Protection Agency off the job. It is now commonly referred to as the Halliburton Loophole.

Fracking taints water sources near drilling sites, and many households have discovered their water is not only undrinkable after gas drilling … it’s even flammable. It turns out this is just the tip of the iceberg of the environmental damage done by the gas drilling.

The fracking now taking place is headed for towns in upstate New York, including the Catskills. Some of the drilling could take place near the reservoirs and tunnels that provide drinking water to 9 million New Yorkers.

The boom in natural gas drilling is contaminating America’s water supply. Fracking is not just about water pollution. The air pollution is devastating.

“… Meet Lisa Parr. First, she thought she had the flu. Next, she developed severe rashes, tremors, memory loss, and lost her ability to walk. More than a year and eight doctors later, they finally diagnosed her with environmental poisoning. Neurotoxins were present in her blood – the same present in natural gas production, as tests by the state environmental department confirmed. Parr wasn’t the only one affected. Her husband and daughter both suffered chronic nosebleeds, rashes and respiratory problems, as the Wise County Messenger reports.

The Barnett Shale region around Texas is chock full of similar cases of air and water contamination related to natural gas drilling. A local land assessor now depreciates appraisal values 75 percent when a gas well is on the land.”

But what about Global Climate Change. Isn’t natural gas supposed to be cleaner than oil or coal?

A preliminary paper by Robert Howarth, a professor of ecology and environmental biology at Cornell University, raises huge questions about how clean natural gas is when total emissions are considered.

Howarth comes to the staggering conclusion that “When the total emissions of greenhouse gases are considered, fracturing-obtained natural gas, and coal from mountain-top removal, probably have similar releases, and in fact the natural gas may be worse in terms of consequences on global warming.”

Howarth argues that greenhouse gas emissions from gas from fracturing are estimated to be 60% more than for diesel fuel and gasoline.

The corporations supplying the current and future energy needs of the United States are poisoning our air, land, and water. Obtaining natural gas by using fracking methods is literally threatening our entire nation’s water supply. Get it? Not just over here … and some over in that state … but The Entire Nation’s Water Supply!

After watching Gasland I could only come to this conclusion: The people running the oil and natural gas industry, and their bought and paid for politicians and lobbyists, are either criminally insane … y’know … Crazy Stupid People … or they’re … aliens.

11 out of 10 sane people agree … We can’t breathe the toxic plumes of ethane, pentane, hexane, octane, xylene and nonane venting from frack storage tanks.. We can’t grow our food in land steeped in poisonous chemicals. We can’t irrigate crops using water contaminated with carcinogens. We can’t drink water that is flammable.

Well … human beings can’t … but aliens from a galaxy far far away might relish a flaming glass of toluene after a brisk jog through a methane cloud. But let’s assume for sanity’s sake … mine in particular … that the people involved in the oil and natural gas industry and their minions are human beings. Look at what they are doing. They’re wrecking the nation’s water supply… for money! They don’t seem to realize they have to live here too. That’s why they’re Crazy Stupid People. The kicker is that these people, though suffering a psychotic break from reality … own the asylum. It’s going to be awfully hard talking them out of their offices… down the hall … into the recreation room … in time for medication and group therapy.

Stephen King published his 8 pound apocalyptic thriller, The Stand in 1978. I always liked one of the minor characters … a guy wearing one of those repent-the-end-is-near sandwich boards. King called him The Monster Shouter because he stood on street corners and yelled, “There are monsters coming! Monsters in the cities, monsters in the suburbs, monsters in the countryside!”

I try to get a little of that in every day before picking up my little boy from school. The pay is not so good but at least the hours are flexible.