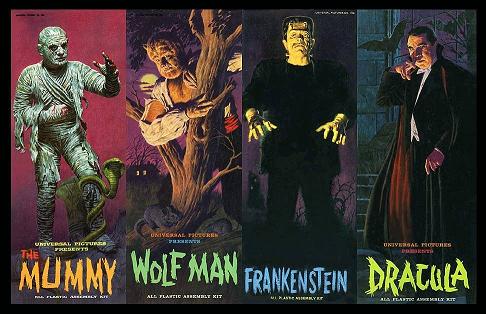 Universal Studio’s reign of terror began with the release of Dracula and Frankenstein in 1931. The following year Boris Karloff lurched from his ancient sarcophagus in The Mummy. Soon The Invisible Man and The Werewolf of London joined Universal’s pantheon of monsters.

Monsters were big box office. Horror films enabled the studio to stay afloat during the depression years and Universal cranked out sequel after sequel to keep moviegoers coming back for more. After three more Frankenstein films, Bride of, Son of, and Ghost of Frankenstein, some bright boy at Universal noticed a drop in ticket sales. If one monster wasn’t pulling in the audience then maybe teaming up two monsters might revive the franchise. Hence … Frankenstein Meets The Wolf Man. And if two monsters tearing up the screen doesn’t do the trick, then how about three monsters? House of Frankenstein added Dracula to the monster mix and a year later the terror trio of Dracula, the Wolf Man, and Frankenstein’s Monster were reunited in The House of Dracula.

For over 14 years Universal Studios milked the horror genre for all it was worth. The Monsters that terrified filmgoers during the depression had by the end of World War II lost their scary movie mojo. What could the studio do to get the last penny out of their resident evils? If they couldn’t use The Monsters to scare the audience … then they’d play them for laughs in Abbott and Costello Meet Frankenstein. The horror cycle was officially over … but there was still one more way to cash in on The Monsters … Television.

In the 50’s Universal unloaded their library of horror films to independent television stations eager for cheap programming and the baby boom generation discovered for themselves … The Monsters. At 10:30 every Saturday night I’d be sitting waaaaay to close to our Zenith black and white television for KTNT’s Nightmare! For the next hour and a half until the station signed off for the night I learned everything I needed to know about The Monsters. To protect yourself you needed garlic, wolf bane, holy water, crucifixes, wooden stakes, silver bullets, and whatever you do … don’t let The Mummy get at the brew made from Tana Leaves during the full moon. If you couldn’t dispatch the fiends during the dead of night the next best protection from Werewolves and Vampires was … daylight. Lawrence Talbot would change back into human form with the sunrise and if touched by the light of dawn Dracula would turn to dust. You were safe from the worst of The Monsters during the day. Regardless of what time of day it was, you could always avoid the staggering Frankenstein Monster or the foot-dragging Mummy.

At the time I was told by my parents and the nuns at school that watching “That Junk” would turn my brain to mush and it wasn’t healthy to be fascinated with the macabre. Well … anyone who spent as much time as I did glued to the screen watching “That Junk” knows more about how to deal with Republicans than the all the reporters and pundits of MainStream Media and the entire leadership of the Democratic party combined.

You don’t negotiate with monsters. You don’t make “deals” with vampires. You don’t reach across the aisle to create bipartisanship with the undead. All vampires want to do is rip your throat open and drink your blood. Werewolves are driven to tear you to pieces. If you’re standing between The Mummy and a bubbling cauldron of Tana Leaves he’s going to rip you in half like a phone book. The only way to appease these guys is to kill yourself before they get their hands on you.

Nope … there’s only one way to deal with monsters. They have to be dragged out of their coffins, their grotesque laboratories, and all the dark corners where the ghouls nest, to be brought smoking and howling into broad daylight. That’s what the villagers did in the movies. But we don’t do that. I don’t think enough Americans learned anything from Universal Studio’s horror films. Too bad for us. If you’ve never seen the movies … you don’t know beans about accountability.

Derrick Jensen writes, “ … the truth is that all of the men in this prison have killed far fewer people, destroyed far fewer lives, stolen far less money, than the average CEO of the average limited liability corporation. Here are two riddles about this, neither of which are very funny.

Question: What do you get when you cross a long term drug habit, a quick temper, and a gun? Answer: Two life terms for murder, earliest release date 2043.

Question: What do you get when you cross two nation states, a large limited liability corporation, forty tons of poison, and at least 8000 dead human beings? Answer: Retirement with full pay and benefits.

If my students had robbed or killed people in the service of economic production, behind the legal fiction of a limited liability corporation, they could now be joining Warren Anderson, ex-CEO of Union Carbide, on the back nine, instead of spending the rest of their lives in tiny cells.”

We don’t know who murdered John Kennedy, it’s up for grabs who really pulled off 9/11. All we really know for certain is the Official Government Story doesn’t wash. But … The criminals that made up the cabal that plotted … and succeeded … in overthrowing our government are well known to us. And we have done nothing to bring them to justice.

Ten years ago … Ten Years Ago! … The Supreme Court of The United States broke all the laws they needed to in order to steal the election for George W. Bush.

As Vincent Bugliosi wrote in None Dare Call It Treason, “… The stark reality, and I say this with every fiber of my being, is that the institution Americans trust the most to protect its freedoms and principles committed one of the biggest and most serious crimes this nation has ever seen–pure and simple, the theft of the presidency. And by definition, the perpetrators of this crime have to be denominated criminals.”

Everyone who understands Bugliosi’s words knows that the day The Supreme Court handed the presidency to Bush was the last day this country existed as we understood it. For all intents and purposes The United States of America was over. The mega-criminals took over 10 years ago, they haven’t gone anywhere, and they’re not done stealing every last dime out of us that they can.

We did not boil out into the streets and demand justice … so we didn’t get any. Bush’s successor, the current corporate stooge “running” the country, made it clear that he was not going to demand accountability and drag these swine into a courtroom … ever.

Since we have not held the Republican criminals accountable … they’re coming back. Fueled by corporate-money-is-speech financing courtesy of The Supreme Court, rigged voting machines, and the 24/7 Fox News fertilizer spreader, we’re likely to see in a few days the Republican Monster Machine come roaring back into town.

Sarah Palin and Rudi Giuliani have endorsed an honest-to-god war criminal for North Carolina’s 7th Congressional District. Ilario Pantano killed two unarmed Iraqis while serving in Iraq. Pantano shot the men repeatedly after stopping their vehicle at a checkpoint. He admitted to emptying one magazine of bullets into the Iraqis, then reloaded and fired thirty more rounds into the dead men. He then hung a sign over their corpses that read, “No better friend, no worse enemy.” Despite his admission, the military cleared Pantano of wrongdoing in 2005.

This guy’s scarier than the entire cast of House of Frankenstein. He’s … real.

This November get ready for Monster Mash 2010.

With the moon riding high and the wind in the trees … see the newly elected creatures lurching out of their graves and shamble towards our nation’s capital.

Listen to this segment from The Mike Malloy Show here: http://www.voicesinourheads.com/2017/07/13/shelf-life-monsters/ ‎