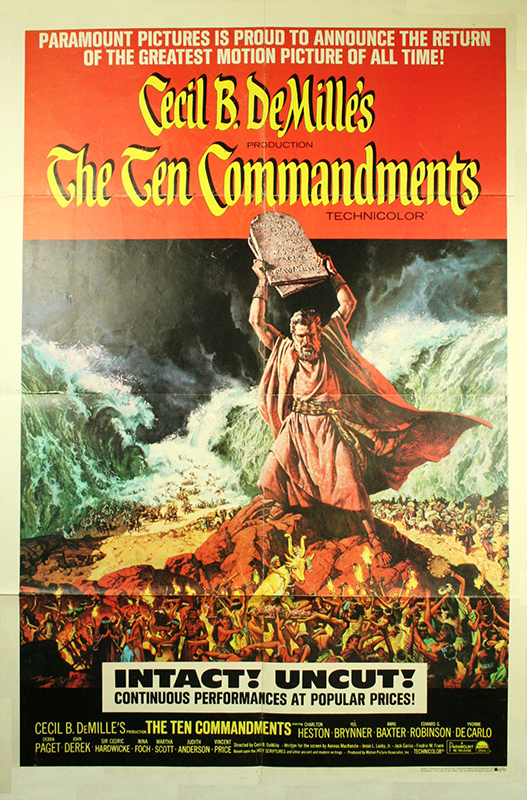 Listen to this segment from The Mike Malloy Show: http://www.voicesinourheads.com/2017/07/10/comes-jeebus-cottontail/ ‎

Just to set the record straight … I am not a tolerant person. If you believe, follow, and make decisions based upon any of the big deal world religions … I think there’s something wrong with you. I think you’re suffering a low-grade psychotic break with reality. So right off the bat, I find it pretty hard to get along with 59% of the world’s population. But then again 80% of the countries in the world are capitalist nations. I have a problem with them too as they are equally delusional and arguably more dangerous. And if you’re a religious capitalist … you’re the beast of both worlds.

Now we’ve got that out of the way … In honor of the Passover/Easter Season, and since I’m not Redeemed by the Blood of the Walking Undead, I decided to sit back in my comfy chair in front of our Big-Ass-HDTV and watch eight hours of Judeo-Christian Gibberish.

Cecil B. Demille’s 1956, 220-minute long, The Ten Commandments, is one of my top contenders for the craziest movie of all time. In today’s dollars it cost well over 100 million to produce. The Moses Myth is presented in glorious Technicolor and stars Charleton Heston as The Man With The Plan. You’ve got to hand it to Cecil Bee because out of all the actors working in Hollywood in the fifties, he picked the least Semitic-looking actor he could find to play the Head Jew. A feat only topped in 1965 when George Stevens hired six-foot-four-inch Swedish actor, Max von Sydow, to play Jesus in The Greatest Story Ever Told.

But back to The Big Ten …

A completely delirious moment in the film occurs because of another deranged casting choice. Edward G. Robinson snarls out, as only gangster king-pin Johnny Rocco could, Where’s your god now Moses nyeah. Truly incredible.

Everybody always talks about The Parting of the Red Sea Sequence as the razzle-dazzle high-point of the film. Not me.

I’m in awe of The Finger of God carving out his Top-Ten Rule Book using Paramount’s cartoon department and a bunch of sparklers. Each and every Commandment is stentoriously boomed out by Charleton Heston’s voice slowed waaaaaay down to a close approximation of what Gawd might sound like if he ever did voice-over narration. After Chuck “Moses” Heston receives The Law, the hair stylist on the set gave him the strangest “do” in cinematic history. I can’t describe it. I don’t know if anyone can. You’ll just have to fast-forward to see for yourself.

And then everybody wanders around in the desert for 40 years until they get to The Promised Land.

Just about anybody can comfortably walk at a pace of three miles an hour. Say you walk six hours a day. In 40 years you’d have walked 262,800 miles. Even if you took weekends off, and stopped by an oasis for a couple of weeks now and then, it wouldn’t take you 40 years to stumble across The Promised Land. Get out a map of The Middle East and take a look for yourself. Moses (with an assist from Gawd Almighty) may have turned rivers to blood and bedeviled the Egyptians with frogs and lice, but he obviously couldn’t find The Promised Land, or his own ass, using both hands and a menorah.

Though the story of Moses and The Exodus is central to Judaism, and thus by proxy to Christianity, there is no historical or archeological evidence the Jews were ever enslaved by Egypt. There is no historical evidence there was ever a Moses either. So it’s not surprising to find there are no historical records (outside of the Old Testament) for a man called Moses leading a large group of Israelites out of Egypt. So the Passover question, “Why is this night different from all other nights?” can only be answered … Beats me! Pass the matzo/bitter herb sandwiches.

The Jesus Myth in George Stevens The Greatest Story Ever Told followed the same Blockbuster formula laid down by Cecil Bee:

1.) Cram as many would-be-has-beens into the cast as the budget will allow.
2.) Hire the least Semitic-looking actor you can find, Max von Sydow, to play The King of the Jews, and
3.) Heighten the audience’s sense of religious awe by slowing the story down to the speed of your average glacier. And then slow it down some more.

It took George Stevens three hours and 19 minutes, and over 140 million of today’s dollars, to tell the Jesus Story. Along the way we get to see Shelley Winters bump into Jesus and claim She’s Cured! Well, cured from something because she never said what it was that was bothering her. Charleton Heston’s back but this time as John The Baptist. Even though the sets were made of tungsten carbide steel … he still managed to chew up the scenery. Roddy McDowall stops collecting taxes and comes a runnin’ when Max says, Come follow me and Jamie Farr wouldn’t be in MASH for another nine years, so he goes along too. David “The Man From Uncle” McCallum plays Judas … badly. But the three finest examples of lunatic casting, in ascending order, are:

Ex-funnyman Ed Wynn as the ex-blind guy. John Wayne as a Roman guard who says after Max dies on the cross, Surely this was The Son of Gawd. And the toppermost of the poppermost, when everybody goes up to the tomb on Easter Sunday to see what’s up, they find an angel of The Lord who tells them … He Is Risen. I had completely forgotten the part was played by Pat Boone!

No wonder Telly Savalas washed his hands of the whole thing.

Now I know they had to stick to the script. You can’t rewrite The New Testament. But just from a storytelling standpoint, nowhere can I find a good reason for a couple of scenes in the film. On Palm Sunday everybody is loving them some Jesus. They can’t get enough of him. But then a couple of days later they’re yelling at Telly Savalas to crucify him. They’d rather have Richard Conte as Barabbas, a convicted murderer, released than see Jesus go un-nailed. Why? Were the Jews so fickle they’d choose Don Barzini over Jesus? What in the Wide Wide World of Sports made the mob drop the dime on Jeebus like that? And that little bit of exposition is missing from the script … as well as from The Bible. And that … more than the Gee-Whiz miracles … makes the story unbelievable.

But The Kraziest Kristian movie of all time? Gibbering Mel Gibson’s torture-porn The Passion of The Christ. A full 126 minutes of beating the crap out of, and then brutally killing The Son of Gawd. Now there’s a film Hannibal Lector could sink his teeth into.

Hitchhiking Across the Plain of Megiddo

My Vote is Worth Something