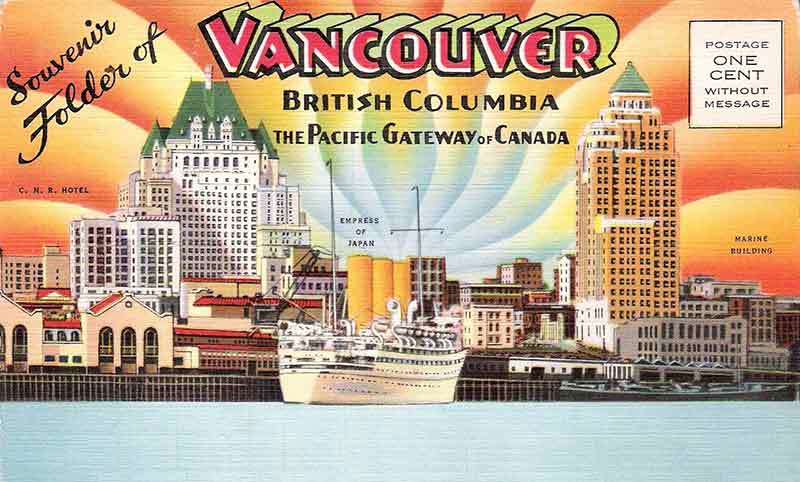 Listen to this segment from The Mike Malloy Show here Permalink: http://www.voicesinourheads.com/2014/08/27/postcard-another-world-2

A friend recently wrote me:

Remember the realization back in the early 70’s that the whole country was insane? Could it be true, could a whole country go insane?

Way back when, in the dim distant past, when dinosaurs ruled the Earth and pterodactyls swooped through the skies – You know – the 70s – my friend and I were trying to get a sense of What’s Going On. Here we are, millions of years later, still trying to map out a strange land. The only difference now is he still lives in that strange land, and my family escaped across the border into Beautiful British Columbia. In fact August 22nd, marked our Third Anniversary in Canada.

I’ve written quite a bit about Our Canadian Life so I wont bore y’all with too many more tales of how much better it is up here compared to the good ole USA. To Sum Up: this is the month we can apply for Permanent Residency and the only way you could get us out of here is with a pry bar and blasting caps. If, for some bizarre reason, we were forced to go live once again back in the states, there’s a very good chance I would die of the dry heaves.

You can’t help but gain a little more objectivity about a country’s Current Events when you’re outside looking in. And after three years of looking at What The Hell Is Happening in the U.S. from across the border – I’m looking at CrazyLand.

Lets take a look at guns for instance:

And then there’s the so-called crisis regarding illegal immigration:

On Aug. 14, the CBSA (Canada Border Services Agency) arrested 21 people for immigration violations during a joint commercial vehicle safety blitz with the Ontario Provincial Police and the Ministries of Transportation and Environment. Immigration advocates were outraged the arrests were conducted during a vehicle safety check.

It’s clear that these raids are relying on racial profiling to make these immigration related arrests. As such the legality of the raids is extremely questionable,” said Macdonald Scott, immigration consultant at Carranza LLP.

And the response from the community? Makeshift signs appeared in neighborhoods saying, We don’t care if you’re illegal or not. Contrast that with the crazy white people terrorizing a bus full of kids caught trying to escape from U.S. backed terror states in Central America.

Want more Canada vs. CrazyLand comparisons? Why bother? It’ll just make you feel worse and I’ll just come across like a smug jerk.

Y’see the answer to my friends question, Could it be true, could a whole country go insane? is – in the words of my Scandinavian ancestors – a resounding Ya Shur You Betcha!

How does a country go collectively nuts? Its easy. All you have to do is lie to the people. And keep lying to them. Day in. Day out. Forever. Eventually – voila – crazy country.

And there really doesn’t seem to be a cure. As Mark Twain said, It’s easier to fool people than to convince them they have been fooled.

You can prove that one by just talking facts to anyone who habitually watches Fox News or listens to Limbaugh.

It’s not Talking Truth to Power. Its talking Truth to Knuckleheads. And it can’t be done. Facts bounce off the skulls of insanity-induced dumbasses. You might just as well try hunting for grizzly bears or wild boars with BB guns. You’re just going to make them mad.

So the question arises: How many lies over how many years does it take to push a country past the tipping point? Germany under Hitler seemed to have gone bull-goose loony in about 10 years. All I know is the U.S. government and the media have been lying their collective asses off as long as I have been alive.

It’s understood that commercials are designed to condition people to want things they don’t need. This is done by scrupulously avoiding the truth. The average TV-watching American will have seen 2 million commercials by age 65. The typical commercial is 30 seconds long so were talking about absorbing a million minutes of garbage while trying to watch our favorite shows. Decades of watching dancing rabbits singing about toilet paper has got to have some effect on our national psyche.

But those are the little lies were exposed to. Its the Big Whoppers the government has been telling us that twists our balloon-like brains into amusing animal shapes.

Was there an international communist conspiracy to topple Our Way Of Life in the 50s? Nope. Just a conspiracy hatched by politicians (and their media advisors) to whip up The Fear and guarantee their election so they could fill the coffers of the Military-Industrial National Security State with our tax dollars.

In the 60s the Johnson administration lied about what really happened during The Gulf of Tonkin Incident. That lie mushroomed into the Vietnam War. The Pentagon Papers, leaked by Daniel Ellsberg revealed the Johnson Administration systematically lied, not only to the public but also to Congress, about the war that killed millions of Vietnamese, over 58,000 Americans, and cost over $686 billion dollars.

It doesn’t help that we’ve all been taught to forget that America was established upon genocide and slavery. The Declaration of Independence and the Constitution are nice documents but we got the start-up cash from slaughtering indigenous peoples and using generations of Africans for slave labor.

Now load on all the crap Fox and the right-wing demagogues spew Every Goddamn Day of the year and out of that noxious stew of lies emerges CrazyLand USA.

Hey check out Iraq. It appears that the country the U.S. government illegally invaded on March 20, 2003 is coming apart at the seams. I guess none of the Idiot Elite saw that coming.

Want to talk about Ferguson, Missouri? This is what happens in a racist country when the government dumps millions of dollars worth of military hardware on cops who want to play army.

It truly is a double edged sword. If you believe the lies – you’re crazy. If you don’t swallow the lies – The True Believers and the Dominant Culture that affirms the lies will label you crazy.

As Krishnamurti said, It is no measure of good health to be well-adjusted to a profoundly sick society.

I could go on but I don’t have the will to give myself another panic attack. As Agent Rogersz said in one of my favorite movies, Repo Man, It happens sometimes. People just explode. Natural causes.

I’m fresh out of ideas. I can’t see the benefit of continuing to chronicle the symptoms of a country that has made so many wrong turns over the last 60 years its impossible to imagine how it could ever get back on track. If nothing else its terribly obvious the whole damn country might benefit from another little thinky-think before the next election.

But what the hell. These days I practice my banjo and every once in awhile take a peek with my telescope at the inhabitants of Planet Nutzoid. Yup. Still crazy after all these years.

Having Wonderful Time. Wish you were here.