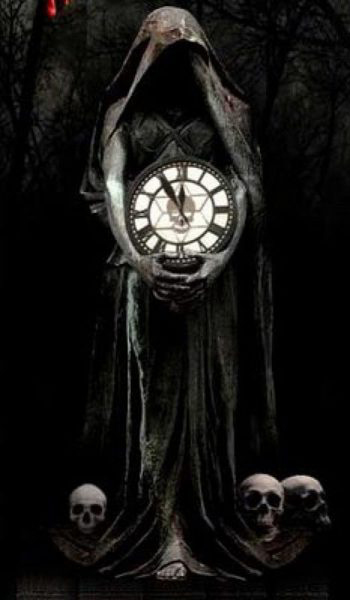 A bell tolls each life event.

Before we can catch our breath the bell tolls again for the very next thing as we continue to race around the sun at the speed of time. To remember what we have seen, rushing from one thing to the next, we watch television, the medium designed to make us forget. To facilitate the forgetting process the most trusted television news network tells us lies 60% of the time.

The second hand sweeps around the face of the clock, every second a new story is told, and with every revolution memories are wiped clean. Memory is a palimpsest; the new erases the old and is itself overwritten by the next. But — stop the clock — and we can see the ghosts who live between the tick and the tock. Before the present is erased by the future, we can still see the faint traces of the past. As Faulkner said, “The past is never dead. It’s not even past.”

Fear of The Other beats in the dark heart of White America. Outnumbered by non-whites, the white community’s fear is palpable. The white man struggles to keep the fear contained but he is convinced one day non-whites will collectively realize the simple arithmetic of Majority Rule. And on that day life will be forever changed, and he will lose his social, political, and economic status. He hates what he fears, and he fears what he doesn’t understand — which is almost everything.

Any perceived relaxation of control is seen as a threat to the current hegemony. What should the white American do? The pastors of his churches defend the morality of the status quo through an elaborate scriptural defense built on the infallibility of the Bible, which they hold up as the universal standard of morality. The voices for change are unrepentant sinners because they have rejected the Bible and turned against God. Change is not just change — it is demoniacally inspired to thwart God’s Plan.

It is understandable why the rich would be fearful of change — their dominance would end. But how would they convince their poorer brethren that their goals are the same? They told them that through hard work, and a steadfast commitment to the status quo, they too would also have a chance at the good life. But if the balance of power shifted — that opportunity would vanish.

The politicians were quick to inflame the fears of their constituents because they were simply giving the voice of authority to their own fears. Neighbors and community leaders echoed The Fear. Any change — any change at all — was a threat to their way of life. And none could be tolerated.

Years of living with the building roiling fear created a stridency among the leaders and followers of the status quo. Opposition to the status quo was met with increased intolerance and violence. There could be no compromise because compromise would be in opposition to The Word of God … and their bank accounts.

Incapable of reason — the inevitable result was war.

From April 12, 1861 until General Robert E. Lee surrendered on April 9, 1865, Americans fought Americans in the Civil War. Three quarters of a million soldiers died, more than all the dead from all other American conflicts combined.

The second hand sweeps around the clock four billion times and we seemingly have forgotten why non-slaveholding Southerners fought for the South.

Cotton plantation owner John Townsend wrote about the dire consequences of freedom for the slaves. Non-slaveholders were in danger. He cautioned…

“It will be to the non-slaveholder, equally with the largest slaveholder, the obliteration of caste and the deprivation of important privileges. The color of the white man is now, in the South, a title of nobility in his relations as to the negro.

“In the Southern slaveholding States, where menial and degrading offices are turned over to be performed exclusively by the Negro slave, the status and color of the black race becomes the badge of inferiority, and the poorest non-slaveholder may rejoice with the richest of his brethren of the white race, in the distinction of his color. He may be poor, it is true; but there is no point upon which he is so justly proud and sensitive as his privilege of caste; and there is nothing which he would resent with more fierce indignation than the attempt of the Abolitionist to emancipate the slaves and elevate the Negroes to an equality with himself and his family.”

To protect the right to own human beings, the churches, the politicians, and community leaders appealed to the lowest common denominator — racism — and let slip the dogs of war.

Do we remember the evil cabal guiding the meat puppet’s hand as he signed the Authorization for Use of Military Force Against Iraq on October 16, 2002?

Do we remember Julian Bond saying in 2004, “… As you know, there are many, many people, myself among them, who are convinced that President Bush has been an illegitimate president for four years.“?

Do we remember when they were wrong about … everything?

It is as if nothing has ever happened before. There is no Cause and Effect. There are only the Spontaneous Effects we must constantly guard against. If there must be a cause to be named, it is the people whose skin colors are black, brown, or yellow. The only solutions presented to choose from are to oppress, kill, or enslave them. And then — we will be free.

Stop the clock, and we can see the ghosts who live between the tick and the tock. The hollowed eyes of the limitless dead demand we look. But — we do not remember their names any more.