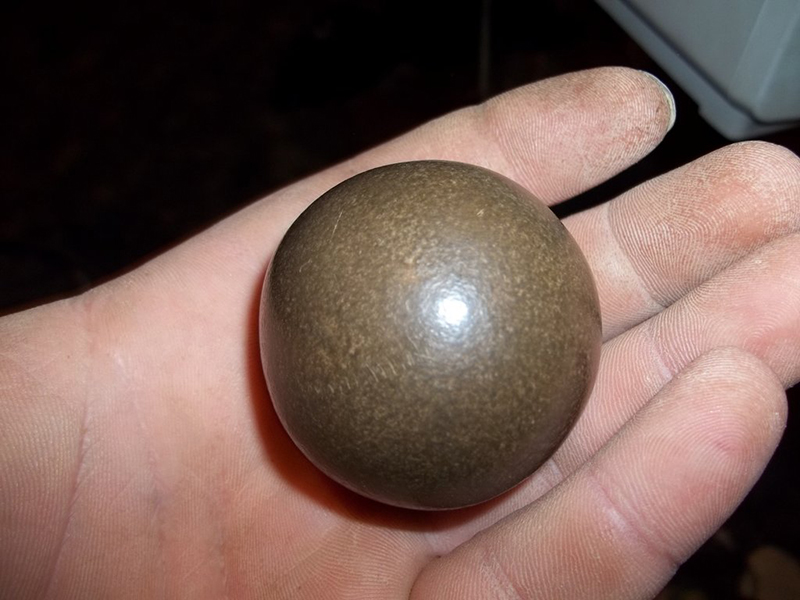 Now It Can Be Told! On Wednesday night, November 12th 2008, the 19th episode of the sixth season of MythBusters aired on the Discovery Channel at 9:00 pm.

Not familiar with MythBusters? The series stars special effects experts Adam Savage and Jamie Hyneman, who use basic elements of the scientific method to test the validity of various rumors, urban legends, myths, movie scenes and news stories in popular culture.

This particular episode explored the validity of one of my favorite idioms:

Is it really true that you can’t polish … shit?

The segment began by collecting the widest possible selection of dung the MythBusters could find at the San Francisco Zoo. They collected feces from 9 different animals, both herbivores and carnivores. Returning to their shop they baked the dung for 6 hours at 300 degrees to remove excess moisture.

And then … a disgusting series of trial and error experiments commenced. Adam tried to shine his dung sample with a buffing wheel. Jamie reasoned that using a wax polish would result in a shine but the results were invalid. The wax was contributing to the gloss … not the shit. Nothing worked until the MythBusters hit upon an ancient Japanese technique called “Hikaru Dorodango.”

Create the Mud
Add water to the dried dung. The ratio of water to dung will vary depending on the type of dung.

Create the Core
Grab a handful of dung-mud and begin to shape it into a sphere with both hands, squeeze out as much water as you can.

Create Preliminary Capsule
Holding the ball in one hand, grab handfuls of dried dung with the other and sprinkle the dung over the ball. With your thumb, gently sweep the excess off, rotating the ball as you do so.

Draw the Moisture Out
Insert the dung-ball into a plastic bag and place in a refrigerator for approximately 20 minutes.

Create Final Capsule Layer
The brilliant shine of the dung-dorodango is created by applying a final layer of extremely fine particles of dung and gently rubbing these particles over the dung-ball.

Adam and Jamie were able to obtain very polished shit without using any foreign materials. Using a glossmeter, through which a rating of 70 is considered “high gloss,” they created dung dorodango spheres with gloss levels of 106 and 183 gloss units. Adam’s 106 was that of an ostrich’s feces, while Jamie’s 183 was that of a lion’s feces

The Myth that you can’t polish shit was … “Busted.”

I believe I can prove that this segment from MythBusters has far-reaching implications for our national discourse for many years to come.

We know that the Bush Regime has been monitoring all electronic communications since before 9/11. We can safely assume that somewhere deep within the bowels of Bush Regime Central some poorly paid Republican underling was Channel Surfing For National Security and watched the entire show with growing amazement and fascination. Immediately after the show ended copies of the program were made and couriered over to the President’s office. George Bush received his copy from Cheney the next day.

The segment aired just 8 days after the national election and ignominious defeat. The mood among the Republican elite had to have been lower than the darkest days of Watergate. But Here Was Hope … Here Was Inspiration … Here Was Finally … A Plan.

Every Republican hack, flack, and stooge converged to hammer out the talking points for the usual suspects; Hannity, O’Reilly, Coulter, and Limbaugh. If lion dung can be polished to 183 gloss units … who knows what level of luster The Bush Legacy could reach in the hands of these professionals? They had been seriously slinging it since the Clinton Administration but now for the first time in 8 years these gas-bags finally had science on their side!

It didn’t have to be true … Since when had the MainStream Media actually braced the Republican Noise Machine for the facts about any spin the Bush Regime released? Never! Who cares if it’s true as long as it’s shiny? It might still reek to high heaven but as far as Republican group-think is concerned … one out of two ain’t bad.

Emerging from the darkness, filth-encrusted but with renewed purpose, the media hit-men of the Crazy Right let loose with salvo after salvo defending The Bright Shining Legacy of George W. Bush:

Crazy Peggy Noonan for The Wall Street Journal: “We have not been attacked since 9/11. Someone-someones-did something right. ‘At Least Bush Kept Us Safe’

Liar-Liar-Pants-on-Fire Karl Rove on FOX, “I think history is going to see him as a man who put America on a war footing in a struggle that will have shaped the nature of this century. He will be seen as someone who liberated Afghanistan and Iraq. Fifty million people now live in freedom in those two countries who did not know freedom before.”

“Vice President Dick Cheney is confident that not only have the Bush administration’s controversial surveillance and detention policies proved successful in fending off another terrorist attack in the United States, but that, if he had the chance, he would do it all over again.

Likewise, he said Iraqis were better off because of regime change spurred by the U.S. invasion, and that he would advise President-elect Barack Obama to maintain the Administration’s surveillance program and keep open the military prison at Guantanamo Bay, Cuba.”

Craven Tim “Groveling” Montgomerie wrote at conservativehome.com, in an article titled: The Things He Got Right, George W. Bush’s Presidency. “Mr Bush has done much more for Africa than Bill Clinton ever did.”

And of course a favorite hold-over from the McCain campaign … The Surge Worked.

The list goes on and on with nary a mention of the countless war dead, crushing National Debt, and a looming depression. I can’t type any more entries because I learned something from an Orson Welles quote the Republicans never understood:

Never Handle … Shit.
Not Even with Gloves.
The Shit doesn’t get … glove-ier
The gloves on the other hand …

I’m not paranoid I’ve Got Proof!