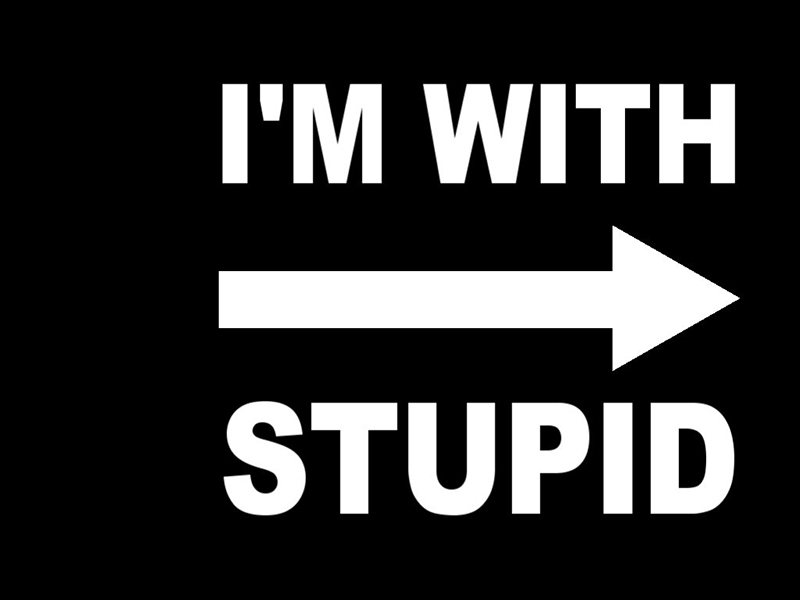 Too Stupid To Live.

The aim of the Elite is to use the dumbasses to bring the country to the brink and then use the ensuing panic to strip away the social safety nets in a Grand Bargain where heads they win — tails we lose. And the dumbasses are going to lose, as Dick Cheney would say, Big Time. For next year’s Darwin Award, I nominate The United States of America.

Of these three features — personal honesty, intelligence, and sincere support of Republican policies — it is only possible to combine two, never all three of these attributes…

The fact of the matter is smart, honest people recoil when they come face to face with Republican ideas. Smart, honest people are aghast at the concept of cutting food stamps for hungry people, denying health care for the sick, and taxing the poor and middle-class while giving a free ride to the richest people in the country. But the problem is smart, honest people have ceded too much ground to the dumbasses and their venal overlords. The proof is in the polls, ladies and gents.

In 2003 nearly seven in 10 Americans believed Saddam Hussein was personally involved in the Sept. 11 attacks.

In 2011, 38% of Americans believed that the US found clear evidence in Iraq that Saddam Hussein was working closely with Al Qaeda; 26% believed that Iraq had WMDs just before the Iraq War, and 16% believed that WMDs were found in Iraq.

And on the domestic front:61% of Americans don’t believe in evolution. 47% believe the universe is less that 10,000 years old. One child in four grows up not knowing how to read. 21 million Americans can’t read at all. 45 million are marginally illiterate and one-fifth of high-school graduates can’t read their own diplomas. 50 percent of adults cannot read a book written at an eighth-grade level.

In math, reading and problem-solving using technology — all skills considered critical for global competitiveness and economic strength — American adults scored below the international average on a global test, according to results released Tuesday.

Jesus H. Christ — how did we get so dumb! Who benefits from a “Confederacy of Dunces”?

George Carlin knew… “They want obedient workers, obedient workers. People who are just smart enough to run the machines and do the paperwork and just dumb enough to passively accept all these increasingly crappier jobs with the lower pay, the longer hours, the reduced benefits, the end of overtime and the vanishing pension that disappears the minute you go to collect it.”

There is a reason it used to be a crime in the Confederate states to teach a slave to read: Literacy is power. It’s a well-known fact that information is hidden from dumbasses … in books. And the crafty, dishonest elite have been nurturing crops of dumbasses for as long as I can remember.

But there’s no reason to dredge up ancient history. In September 2010 Congressman Lynn Westmoreland told his religious conservative constituents he would need their support when the Republicans shut down the government. He told them what Republicans were planning before they got elected in 2010.

And the crowd went wild.

Shut ‘er Down! Now all the dumbasses want in on it. These are the spiritual descendants of the dumbasses who believed Saint Ronnie 30 years ago when he told them Government was the problem. They don’t seem to understand that the government’s social programs they depend on, the programs that actually benefit people, are overwhelmingly loathed by the people who used Ronnie as a meat puppet to sell poison to the people.

So here we are, collectively as a nation, managing to lose a game of One Card Monte.

“We’ve arrived. We are now parked on the exact spot where our best experts tell us full-blown fascism is born. Every day that the conservatives in Congress, the right-wing talking heads, and their noisy minions are allowed to hold up our ability to govern the country is another day we’re slowly creeping across the final line beyond which, history tells us, no country has ever been able to return.”

Here’s Naomi Klein’s The Shock Doctrine, The Rise of Disaster Capitalism in 25 words or less: “The Corporatocracy creates, or takes advantage of, social and natural disasters to force their political agenda while picking up the pieces for pennies on the dollar.”

Regardless, I think the aim of the Elite is to use the dumbasses to bring the country to the brink and then use the ensuing panic to strip away the social safety nets in a Grand Bargain where heads they win — tails we lose. And the dumbasses are going to lose, as Dick Cheney would say, Big Time. For next year’s Darwin Award, I nominate The United States of America.

Am I blaming the victim? Yeah — in a sense I am because in the information age, ignorance is a choice. But we all share some responsibility for the ascendancy of the dumbasses. We didn’t stop them. We allowed control of The Commons to be wrenched away from us. We allowed George W. Bush to take office. We allowed the invasion of Iraq. We stayed in our homes, watched TV, and went to our jobs instead of going to the streets. We own a good chunk of the chaos. Where the hell did we think all this was going to end up? Disneyland?

But what about the Elite Swine who engineer and organize the dumbasses? Well — psychopaths are really good at some things. They’re great at accumulating money and power. But psychopaths don’t have a very good grasp of The Big Picture. They miss a couple of key components because of their blind spots because, y’know, they’re insane.

The wealthy win because they think when push comes to shove they can always hire half the poor people to shoot the other half in a rousing game of “Let’s You and Him Fight.” They can’t imagine their tea-bagger minions going Blood Simple and chewing off their leashes. They can’t imagine the overriding thirst these religious fanatics have that can only be slaked with apocalyptic destruction. The Elite just want a fatter bottom line, but the minions want to get to Armageddon before their next birthday. The beasts and their masters have forgotten this passage from their Bible because they only cherry pick the parts that further their agenda. They have forgotten the wisdom of Solomon from the book of Proverbs, “He that troubleth his own house shall inherit the wind.”

Is it just me, or is it gettin’ kinda breezy around here?

Listen to this segment from The Mike Malloy Show here Permalink: http://www.voicesinourheads.com/2013/10/14/too-stupid-to-live-2/ ‎