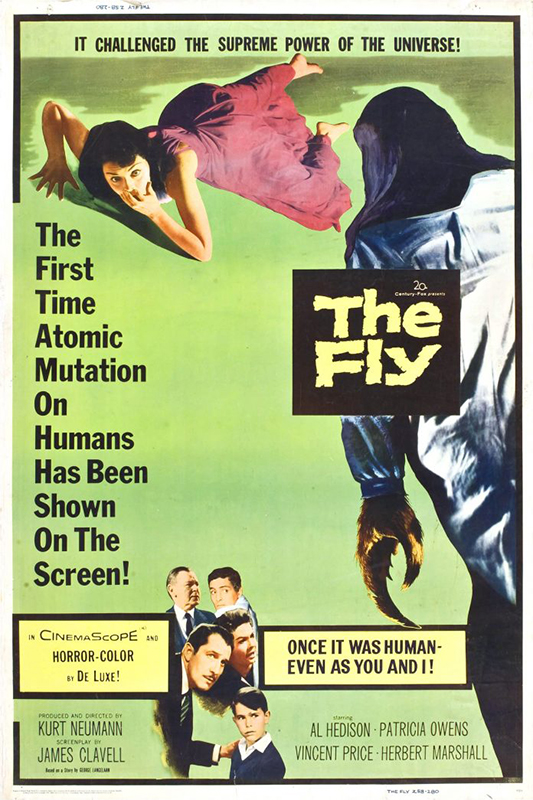 Since the beginning of exploitation movies, the most important element wasn’t the movie … it was the movie’s poster. The poster had to grab your attention with the promise you were going to see something you had never seen before … all for the price of an admission ticket. It worked for P.T. Barnum flim-flamming New Yorkers into Barnum’s American Museum, and a hundred years later it worked for James H. Nicholson and Samuel Z. Arkoff, founders of American International Pictures.

Nicholson and Arkoff packaged and released double bills of “B” movies for teen-aged baby boomers whose parents were at home watching television. Their first step was to come up with a catchy title and then whip up an eye-catching poster. On the strength of the poster they’d raise the cash and finally write the script and produce the movie. That formula didn’t produce good movies … it produced profits. The only way something decent could come out of that process was by accident.

But … they got my money.

I spent all my hard earned quarters watching the junk they churned out. I would sit through a double bill of The Brain That Wouldn’t Die and Edgar Allen Poe’s Tales of Terror for the few moments of chills they offered. The monster in all its gory burst through the door in the first movie and Vincent Price was reduced to “a liquid mass of loathsome putrescence” in the second. But it wasn’t good enough. I was looking for something stronger. The jolt I was looking for was a million volts of white hot pure fear, not some dim bulbed flashlight. I was a pre-teen horror movie junkie chasing a high that would never happen … again.

The first and only time it happened was in 1958 when my sister, cousins, and I, were all sitting in the Northgate theater watching The Fly.

We all know the story. A scientist builds a matter transporter device in his basement. He puts an inanimate object in the first cabinet and turns on the machine. The object is disintegrated and transmitted to the second cabinet where it is reintegrated. After a successful experiment using an actual guinea pig, he decides to transport himself. He gets into the cabinet but unbeknownst to him a housefly is also in there with him. Zap. The machine has commingled the atoms of the fly and the man. The scientist emerges from the second cabinet with the head and arm of a fly.

But we don’t see the transformation. All we know is something horrible happened. The scientists wears a black hood covering his head, keeps his “fly” hand in his lab coat pocket, and types notes to his wife. He implores her to capture the fly “with a white head” so he can go through the transporter again. The fly cannot be found, but the wife convinces him to go through the process again. When he emerges from the cabinet she pulls the black hood from his head and …

That’s when my fear-0-meter went into the red zone, shorted out, and exploded.

The sight of a fly’s head on a man’s body blew my whole family right out of the theater’s auditorium. All I remember is a close-up of the fly, the wife screaming, and the next thing I knew my sister, cousins, and I were cowering in the lobby. I do not remember how we got there. It appears there is such a thing as a disintegrator-integrator and it’s fueled by fear.

We eventually calmed down enough to go back to our seats and watch the rest of the movie.

The wife drives her husband to their family owned factory. He goes to a hydraulic press, sets the control, and puts his head and arm under. She activates the press.

Days later the scientist’s little boy tells his uncle and the police inspector that a fly with a white head is trapped in a spider’s web in the garden. The two men rush to see the spider advancing upon a fly that has the head and arm of a man. It screams … help me … help me … The spider begins to eat the shrieking man/fly as the police inspector picks up a rock and crushes the nightmare in the web.

Saturday night at the movies was over. We got back home and nobody wanted to sleep alone that night. We all crawled into the same bed and hid under the thick blankets until we passed out from combined body heat and lack of oxygen.

I have never experienced that pure blast of fear and shock since. And the reason is simple.

I was 7 years old when I saw The Fly. My sister was 10. We were just old enough to follow and believe the simple story. We completely bought into the whole setup so when it was time for the Big Reveal, we didn’t see a rubber mask covering David Hedison’s head … we saw the head of a fly.

As I grew older I couldn’t help but become a more discerning movie-goer when it came to horror movies. A handful of movies didn’t come close to the fear quotient of The Fly but they were at least in the same ballpark. Psycho, Invasion of the Body Snatchers, The Haunting, Night of the Living Dead, and The Exorcist, to name a few. I began to appreciate the movie makers and writers who could build dread and deliver shock without resorting to rubber heads. But when I say “discerning movie-goer,” that doesn’t mean I stopped watching horror movies. It just means I stopped looking for the mother lode and was content with finding a nugget or two. I still watched boatloads of pure unadulterated crap.

Here are some samples of my favorite taglines for movies that never lived up to them:

“If this movie doesn’t make your skin crawl…it’s on too tight!”

“If this one doesn’t scare you, you’re already dead!”

Watching The Fly made me a horror movie junkie. I’ve watched thousands of them. Along the way I’ve discovered what I call The Monster Rules. Here’s the first one: When The Dead Walk … You Run.

Horror and comedy are very similar. Emotions build and at the end you either scream or laugh. But you can’t really deeply analyze horror or comedy. You can try, but dissecting a chilling scene or a joke doesn’t end up with something scary or funny. You just get just some lifeless footnote at the other end of an asterisk in an academic paper.

That said … I’ve certainly learned quite a bit from the horror genre. But what I don’t understand – and at this late date it’s safe to say I’ll never understand – is why don’t people see the horror movie that they are living in Right Now? It’s the perfect generic nightmare. On some level we all understand what is going to happen … something horrible … and yet everyone pretends that nothing is wrong, everything is fine, and nothing is being done to stop the terrible thing that is going to happen. No one is even trying to stop the terrible things that are happening right before their very eyes.

I think the best overview of the horror genre is Stephen King’s Danse Macabre. It was published in 1981 and no one has defined horror in books, movies, and television better. He writes, “… the horror story is our rehearsal for death.”

Well … We’re almost done rehearsing and the stage is set for Opening Night.

I am not trying to be intentionally vague when I write about Terrible Things leading up to Opening Night. Take your pick of “Terrible Things”: Climate Change, Republicans, Fucko the Clown, nuclear war, the rise of worldwide Fascism or our own inevitable demise. I figure things are so weird now it really doesn’t matter which terrible thing we choose to fill in the blank because they all are horrible, and the least of them all is our own death.

As broadcast on the Mike Malloy Show March 6, 2019