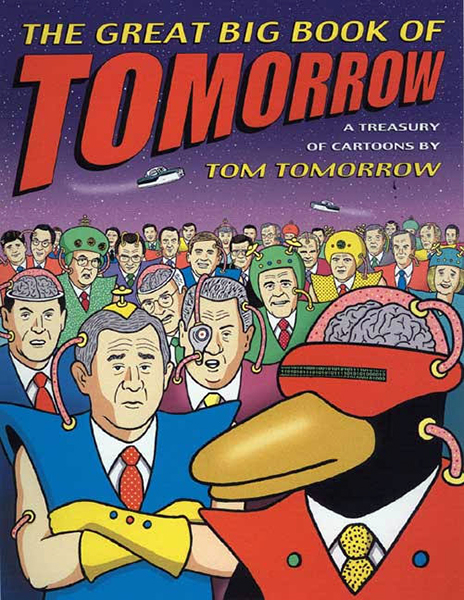 Are “they” (meaning the people who support the ongoing madness) stupid or lying?

Finally someone more erudite than I has summed it up so I don’t have to.

From This Modern World

I’ve grappled many times with the question of whether conservatives are stupid or lying. Brad DeLong redefines the question, and in doing so provides the most plausible answer I’ve come across so far.

We want an “honest conservative”–a conservative intellectual adversary we can respect, who is also intelligent. But their first move is to define a “conservative” as a public supporter of the Bush regime and its deeds. That means, I think, that they are searching the empty set.

Slavoj Zizek applied this to the puppet regimes of Eastern Europe under the iron curtain:

I can’t fix “stupid,” therefore I don’t have to waste my time trying to convince The Stupid.

I can’t convince the liars either.

They already know they’re lying. If they don’t … then they’re mired in denial and … Denial is almost impossible to dismantle. Alcoholics in denial can hit bottom and maybe recognize that denial has brought them to an untenable low point. And then recovery is possible.

The Political Denial Gang might not recognize the horror of what they have wrought … ever.

This only applies to the followers of course. The “Leaders” don’t have the option of being considered stupid or lying.

They’re lying. Though not through denial … because they’re evil.

You can’t fix “Evil” either.

Politicians can yammer ambiguously, inconclusively, and seemingly without morality about torture being necessary. But as long as no major figure in the media, or in politics, resoundingly condemns torture, rendition, and the slaughter of civilians in Iraq and Afghanistan, the “evil-doers” can continue in their inhuman practices.

I repeat … What a relief! I can’t tell you how much better I feel now that I recognize that the situation is hopeless and I can walk away from the conundrum.

I can’t remember any other time in my life when a feeling of hopelessness brought a smile to my face.

How Can You Be in Two Places at Once When You’re Not Anywhere at...