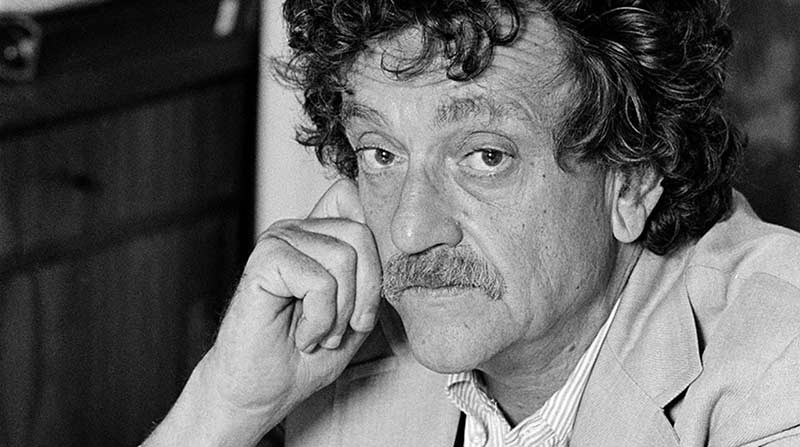 Listen to this segment from The Mike Malloy Show here: Permalink: http://www.voicesinourheads.com/2016/04/29/god-whoever-bless-mr-vonnegut-2/ ‎

I plan to re-read more of Kurt Vonnegut’s books. Cat’s Cradle, Player Piano, and Breakfast of Champions are at the top of the list. But reading too much of Vonnegut, for me, leads to melancholy. It’s when I hold up one of his books next to reality — and see they are exactly the same. And as Vonnegut wrote many times — so it goes.

Forty-seven years ago I bailed out of a Medieval English Literature class just in time and took a Modern Satire class instead. I knew I’d get an easy “A” because how hard could it be? Read a couple of books, answer questions about the books I’d just read, and then I’d maintain a high grade average. Guys that didn’t keep their grades up were destined to become soldiers instead of students. Without a high enough grade-point average it could get pretty drafty going to college in those days.

The assigned reading list was fairly long. I can only remember two of the books from the stack I brought back from the bookstore because they changed my life. To be more precise they changed the way my brain worked. They were The Magic Christian by Terry Southern, and God Bless You Mr. Rosewater by Kurt Vonnegut. Both books are about money.

The Magic Christian was published in 1959 but it could have been written during any time in human history because people have always made fools of themselves for money. God Bless You Mr. Rosewater is a uniquely American story because it points out with laser-like precision how fortunes were originally made in the U.S. by psychopathic opportunists, and then maintained by cadres of sociopathic lawyers.

The problem with writing about satire or comedy is that it’s a losing proposition. As Mark Twain wrote, “Explaining humor is a lot like dissecting a frog, you learn a lot in the process, but in the end you kill it.“

To say The Magic Christian is about how people humiliate themselves for money and everybody has their price, or that God Bless You Mr. Rosewater is about the inherent evil of income equality, is essentially draining the life out of the books and pumping them full of formaldehyde. But here we all are in the American Spring of 2016 and I thought it was time to revisit God Bless You Mr. Rosewater. Because the United States — again — seems doomed to elect as its president a billionaire, or a multimillionaire, both of whom do not give a flying fuck about what happens to 99% of the people. As Lee Camp said after the New York primary, “Plutocracy is kicking ass!“

I’m not going to explain anything Vonnegut wrote. I’m going to copy and paste his words to try to keep the bloodletting to a minimum.

“Thus did a handful of rapacious citizens come to control all that was worth controlling in America. Thus was the savage and stupid and entirely inappropriate and unnecessary and humorless American class system created. Honest, industrious, peaceful citizens were classed as bloodsuckers, if they asked to be paid a living wage. And they saw that praise was reserved henceforth for those who devised means of getting paid enormously for committing crimes against which no laws had been passed. Thus the American dream turned belly up, turned green, bobbed to the scummy surface of cupidity unlimited, filled with gas, went bang in the noonday sun.

“Samuel became even more interested in politics than his father had been, served the Republican Party tirelessly as a kingmaker, caused that party to nominate men who would whirl like dervishes, bawl fluent Babylonian, and order the militia to fire into crowds whenever a poor man seemed on the point of suggesting that he and a Rosewater were equal in the eyes of the law.

“And Samuel bought newspapers, and preachers, too. He gave them this simple lesson to teach, and they taught it well: Anybody who thought that the United States of America was supposed to be a Utopia was a piggy, lazy, God-damned fool. Samuel thundered that no American factory hand was worth more than eighty cents a day. And yet he could be thankful for the opportunity to pay a hundred thousand dollars or more for a painting by an Italian three centuries dead. And he capped this insult by giving paintings to museums for the spiritual elevation of the poor. The museums were closed on Sundays.”

(Eliot Rosewater on the military)

“You know, I think the main purpose of the Army, Navy, and Marine Corps is to get poor Americans into clean, pressed, unpatched clothes, so rich Americans can stand to look at them.”

(Eliot Rosewater speaking with his father)

“The least a government could do, it seems to me, is to divide things up fairly among the babies. Life is hard enough, without people having to worry themselves sick about money, too. There’s plenty for everybody in this country, if we’ll only share more.

“And just what do you think that would do to incentive?

“The Money River, where the wealth of the nation flows. We were born on the banks of it — and so were most of the mediocre people we grew up with, went to private schools with, sailed and played tennis with. We can slurp from that mighty river to our heart’s’ content. And we even take slurping lessons, so we can slurp more efficiently.

“From lawyers! From tax consultants! From customers’ men! We’re born close enough to the river to drown ourselves and the next ten generations in wealth, simply using dippers and buckets. But we still hire the experts to teach us the use of aqueducts, dams, reservoirs, siphons, bucket brigades, and the Archimedes’ screw. And our teachers in turn become rich, and their children become buyers of lessons in slurping.

“I wasn’t aware that I slurped.

“It’s still possible for an American to make a fortune on his own.

“Sure — provided somebody tells him when he’s young enough that there is a Money River, that there’s nothing fair about it, that he had damn well better forget about hard work and the merit system and honesty and all that crap, and get to where the river is. ‘Go where the rich and the powerful are,’ I’d tell him, ‘and learn their ways. They can be flattered and they can be scared. Please them enormously or scare them enormously, and one moonless night they will put their fingers to their lips, warning you not to make a sound. And they will lead you through the dark to the widest, deepest river of wealth ever known to man. You’ll be shown your place on the riverbank, and handed a bucket all your own. Slurp as much as you want, but try to keep the racket of your slurping down. A poor man might hear.'”

I plan to re-read more of Kurt Vonnegut’s books. Cat’s Cradle, Player Piano, and Breakfast of Champions are at the top of the list. But reading too much of Vonnegut, for me, leads to melancholy. It’s when I hold up one of his books next to reality — and see they are exactly the same.

And as Vonnegut wrote many times ” so it goes. But these last words are Terry Southern’s …

“And some say it does, in fact, still go on–they say it accounts for the strange searching haste which can be seen in the faces, and especially the eyes, of people in the cities, every evening, just about the time now it starts really getting dark.”

But still … God (or whoever) Bless You Mr. Vonnegut

From Windows to Linux