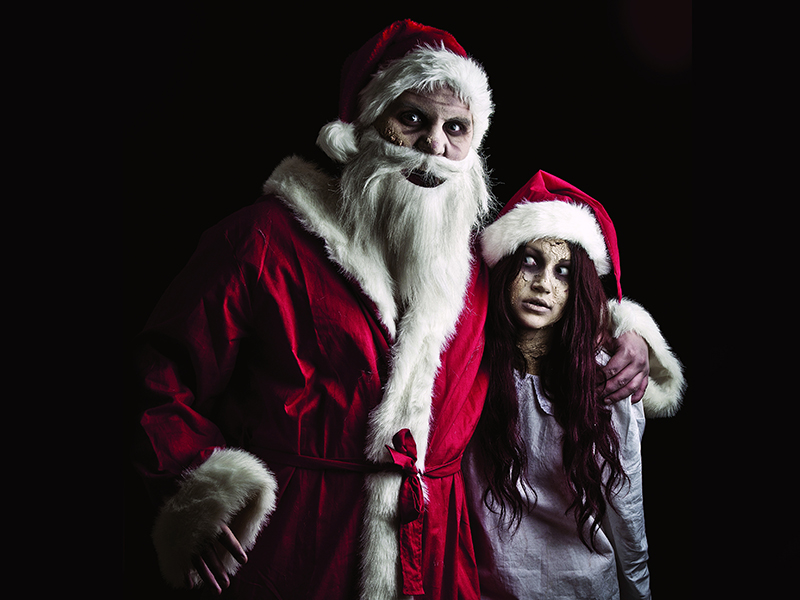 A Confederacy of Dunces. Last Saturday my wife, son, and I, were sitting in a church … voluntarily. As far back as I can remember … this Had Never Happened before. We were there because we’d read in the paper that this was THE place to be for the best Christmas Chorale Music.

Well … not so much. Another typical religion “bait and switch.” They promised traditional Christmas music but instead trotted out a Christian Extravaganza. The church must have some Big Donors because this was a Big Budget Production. Singers, dancers, a small orchestra, and actors served up a strange presentation of Mary and Joseph in Bethlehem, intercut with a story about an upper-middle-class couple trying to adopt a child. Every once in a while everybody would burst into song. Contemporary Christmas pop tunes. The refrain from Jose Feliciano’s Feliz Navidad, “I wanna wish you a Merry Christmas from the bottom of my heart… ” over and over and over until blood spurted from my ears. Ninety minutes of deadly earnest Christian entertainment. Gosh it was fun.

The high point for me was leaving, but before that … the best moment of sheer lunacy was when they cranked up the fog machine, turned up the bright lights, and here comes The Angel Gabriel to tell Mary some crazy news. At that moment it looked exactly like a demented stage production of The UFO Incident, The Betty and Barney Hill Story. Gabriel was getting Mary hip to the idea that very soon the Holy Spirit would “visit” her and nine months later it will be Christmas for The Very First Time. More fog, lights dim, Gabriel splits. Now Mary has to convince her fiancé that she’s not pregnant yet … but she will be pretty soon … but Joseph won’t be the father … but everything’s going to be OK because the baby will be The Son of God. Y’know … the guy who created everything.

Joseph’s skepticism goes away in a couple of lines. Since Mary is the best person he knows, and she could never lie, it makes perfect sense to him that the baby’s Father is the creator of The Universe. According to the idiot who wrote this play, Joseph’s biggest concern is: will Joseph be a good enough role model for The Son of God? Cut to the upper-middle-class couple welcoming their new adopted daughter into their condo and it’s time for everybody to get onstage and belt out a medley of late-model Christmas songs ending with I wanna wish you a Merry Christmas from the bottom of my heart.

We left the church and walked in the rain back to our car. I wasn’t depressed really … just so goddamned sad that people really truly believe that crap.

Adam and Eve ate the forbidden fruit and pissed off The Almighty so bad that no sacrifice could mollify Him. Only a Perfect Sacrifice would satisfy the Big Guy. But humans aren’t perfect. So what to do … what to do …? Here’s A Plan.

1.) Using a little Supreme Being hocus-pocus, allow Mary to be born without Original Sin.

2.) Inside that pristine uterus, mix one egg, some celestial semen, and bake for nine months. Out pops a Perfect Human, The Son of God.

3.) When The Son of God is old enough, have some Jews nail Him to a cross and kill Him.

There ya go … A Perfect Sacrifice. God the Father was placated, The Holy Spirit got laid, and after three days The Son of God came back from the dead (a little worse for wear but outside of a couple of holes in his hands and feet … good as new).

When I was a little kid, I was surrounded by nuns and priests who told me this nonsense was true. I didn’t know anybody who had the balls to go up to Sister Mary Insanity or Father Pedophile and tell ’em the basis of their faith was gibberish. So I never thought about the merits of The Story. But one day I did think about it. An unused node in my brain woke up, the Hillbilly nodule I think it’s called, and it said, “That Don’t Make No Sense.”

And that’s where I filed away all the Jeebus Stories. And just about everything that comes from the mouths of Republicans. And ever since we moved up here to Canada … the U.S. News and Current Events all fall into the “That Don’t Make No Sense” bin.

The day before we unwittingly walked into a church, children were slaughtered in an elementary school in Connecticut. Since that horrible day, Stupid People and the Media Goon Squad have blamed the tragedy on video games, liberals, the removal of God from the schools, and the fact that the school’s principal wasn’t armed and ready to return fire.

Admittedly Canada is ruining the planet by scalping the Earth to get at the tar sands, but head and shoulders above the U.S. when it comes to figuring out what to do about guns.

“… the U.S. rate of gun homicide was nearly eight times Canada’s, the agency (Statistics Canada) says. Homicides accounted for 38 percent of deaths involving guns in the United States and 18 percent in Canada.”

In Canada if you want a gun you have to take a safety course. You have to pass a safety exam. You have to apply for a firearms license. You have to go through a 28-day minimum waiting period. And for people to possess and acquire restricted firearms (handguns, short-barreled semi-automatic rifles, etc.), an additional paperwork hurdle must be overcome. In order to transport a restricted firearm (to the range, for example), an Authorization to Transport (ATT) must be acquired, which allows the owner to transport the gun to and from a gun range. These Authorizations usually expire within three years of issue.

As the owner of a firing range in Surrey, BC, said on the radio last Friday regarding the shootings, “Gun ownership is a privilege.” You have to earn it.

The process isn’t perfect. A gunman opened fire last June in a Toronto mall leaving one dead, two critically injured, and eight victims total. If the U.S. followed the Canadian model, would that have averted the slaughter in Connecticut? Impossible to say. But we have to start somewhere, sometime. Why Not Now? But the Stupid Crazy People yammer endlessly about a constitutionally protected right. And how stricter gun laws will only make it harder for law abiding citizens to get a gun. And that Criminals and Crazies will always find a way to obtain a gun if they want one. And after all the yammering … nothing will get done … again.

Now how in the world could I conflate the foundation of Christianity and the complete lack of a rational gun-control policy? Because for these two examples of insanity to continue, you need the consensus of a Confederacy of Dunces. AKA the United States of America.

Hear this segment from The Mike Malloy Show: http://www.voicesinourheads.com/2012/12/19/a-confederacy-of-dunces-2/ ‎